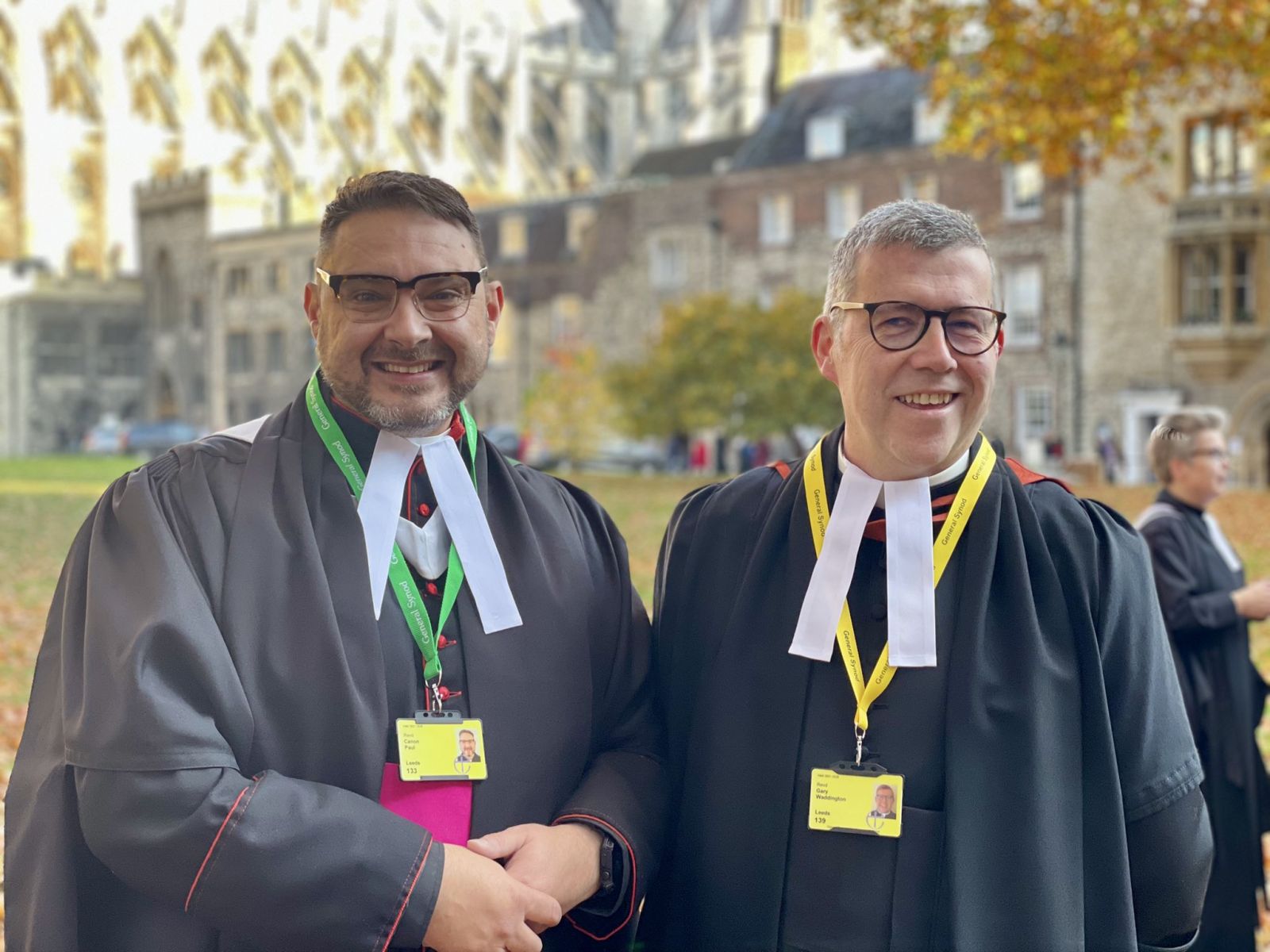 The Diocese of Leeds is pleased to have a motion passed at the most recent meeting of General Synod on the wealth gap, and what we can do to tackle rising inequality.

The motion was moved by the Revd Canon Paul Cartwright, Priest-in-Charge of the Priory Benefice in our diocese (pictured, on the left, with Fr Gary Waddington, right), and amended by Professor Muriel Robinson from the Diocese of Lincoln, before passing.

The motion can be found below.

8 ‘That this Synod call on Her Majesty’s Government (and all political parties) to adopt an explicit policy of reducing the wealth gap between the rich and the poor and the disadvantages that flow from it.’

15 After ‘That this Synod’ insert:
‘(a) recommit to working both nationally and locally to respond to human need by loving service, and to transform unjust structures of society which are creating the wealth gap; and
(b)’.

Revd Paul spoke to the motion, and the text for that speech can be found below.

“Chair, it is a joy to be able to address you and bring to the business of Synod the first Diocesan Synod motion of this newly inaugurated General Synod.  This is a motion that begun its journey to this place from the Deanery Synod of Inner Bradford in October 2017, and it is a great example of how the synodical process of our Church can be used to help shape the Social Policy of our Country to tackle Social Injustice.

“Today we are considering wealth and what it means to be at either end of the wealth spectrum. I am not talking about corporate bodies or organisations that are asset rich although no doubt we will all have views on that, I am talking about people.

“Today I want you to think about an individual’s wealth and how often there is a gap between the rich and the poor which can lead to disadvantage on many different levels.

“Just take a second to look around our synod, look at those who are sat next to you, think about those who you worship alongside at home.  Think about the opportunities that you have been given in your own life, and what has led to them.

“I wonder, have any of you ever been in the right place at the right time, to be given a wonderful opportunity, or maybe for whatever reason you wish that you had been given the same opportunity as someone else that you know, but it just never happens.

“As we are helpfully reminded in our background paper GS 2170B wealth is usually associated with people’s asset, including Savings, other financial assets, housing equity and pension rights, but of course it can be much more than this as it can include pay inequality and pay differentials.  One standardised way in which we can measure these inequalities is through income inequality.

“Our Society already recognises that this can be problematic, especially when not all households in a family are employed and the main earner is on a low wage.

“This week alone we have seen celebrations that more than 300,000 workers are set to receive a pay rise after higher rates were announced for the Real Living Wage.  Of course, this is a voluntary scheme which involves almost 9000 employers, paying over and above the National living Wage.  Archbishop Stephen was quoted in the press as saying, “The Principle behind the campaign for better pay and secure working conditions ought to be a pillar of our new society”.

“But sadly, it is not.  This is a simple scheme that employers can opt into, but at this time under 9000 have chosen to do so.

“This is a Social Policy which is being led by employers; and in real terms the rise equates to approximately £16 outside London and £8 inside London for a 40-hour week.   As we are all no doubt acutely aware day to day bills are increasing, and in real terms disposable income is decreasing for our poorer families.

“Overall income inequality is high compared to other countries, but since the late 1980’s, over the past 30 years, the gap has remained fairly static, that is if we discount the increase seen by the richest in society.

“Wealth on the other hand is even more unequally distributed than income and has risen since the 1980’s.

“40.7% in the parish have no qualifications, and both men and women can plan on average to live 17 years less than the highest average life expectancy.  The impact of inequality can be seen in relation to health and social problems, with the poorest in society being unable to access speedy private healthcare to give just one example.

“Analysis by the YMCA following the recent cut in universal credit by £20 per week on October 6th has shown that a 19-year-old in a one bedroom private accommodation, working 24 hrs a week for minimum wage, will be left with just £51 for the month after covering rent, bills and essentials.  This cannot be right in 2021 and especially when we hear today’s news about the 4.2% rise in inflation over the last 12 months.  Bills are rising.

“The institute for public policy research says that 1 in 6 working households are living in poverty, and more than 30% of “couple” households with one full time earner are in poverty.

“Disability significantly increases someone’s chances of falling into poverty, due to extra living costs, care costs and difficulty in finding suitable work, and if you are from a Global majority Background you are more likely to face a high poverty rate in the UK, with 46% of children from those households experiencing poverty compared to 30% of all other Children

“There are many drivers of poverty which include life events such as illness and redundancy, but most are structural and amplified by increased living costs, such as the period of time we are in at the moment.  This keeps perpetuating the downward cycle of poverty, making it harder for people to access training and education which may assist in lifting people out of poverty.

“COVID has helped us to see the worth of carers and cleaners who work in lower paid roles. They became 'our heroes' and we were grateful for their contribution.

“Parishes are stepping in to provide food and warmth in the colder months, and this is not unique to Yorkshire, as other parishes such as those in Wigan are providing low cost fresh and tinned goods to up to 250 households a week who visit their food clubs.

“And all this whilst others are able to access space travel, ensure that their children receive a tailored education, and leave university with a minimal amount of debt, go to the correct educational establishments that just because of the colour of a tie, a door will be opened for you.  Even during the COVID pandemic those at the top of the Wealth tree have disproportionately seen an increase in riches, whilst the same has not happened at the other end of the spectrum.

“But please don’t get me wrong because who wouldn’t exploit such opportunities if they were presented to their family?

“Maybe even some of you in here fall into this category, you may even feel uncomfortable or angry at what I have just said, but don’t get distracted by these feelings, as it is not a criticism in any way, it is just a statement of fact and experience in the world of today.  And these are just some of the examples of what wealth inequality can lead to, to start 50 meters in front of the start line in a 100-meter dash just because of their life opportunities. Can this be right that some will never get those same opportunities,

“It could be very easy to make this into a party-political debate, but that is not what this motion is about, and I want to remind you that over the years I have mentioned at least three political parties have healed power (albeit on occasions jointly).

“Sisters and brothers, we are told in Proverbs 31:8-9 to “Speak up for those who cannot speak for themselves, for the rights of all who are destitute.  Speak up and judge fairly; defend the rights of the poor and needy”

“But it is not only the poor who we should worry about, as we are also told in Matthew 19:24 that “It is easier for a camel to go through the eye of a needle than for someone who is rich to enter the kingdom of God” Surely we have to call out the dangers of such inequality around wealth that we experience in our country today.

“Some of those who are fortunate enough to have above average wealth use their resources to try and redress the balance, but this depends upon their social conscience.

“In 1 Timothy 6:17-18 “Command those who are rich in this present word not to be arrogant nor put their hope in wealth, which is so uncertain, but to put their hope in God, who richly provides us with everything for our enjoyment. Command them to do good, to be rich in good deeds, and to be generous and willing to share”.

“Chair, we cannot expect to be able to write Social or fiscal Policy on behalf of Her Majesty’s Government, or even eradicate the wealth Gap, but what we can be is that gentle voice which speaks about the injustice of such a Gap, a Gap that leads to reduced opportunity for so many in our country.  We can be the mirror which shows moral injustice to those who care to look into it.

“I look forward to hearing your comments on the work which has begun in the Inner Bradford Deanery and comes to you today from the Leeds Diocesan Synod.”